Skip to content
View cart “Thinking For A Change from Michael Breen” has been added to your cart.
Search here
Discount Code: 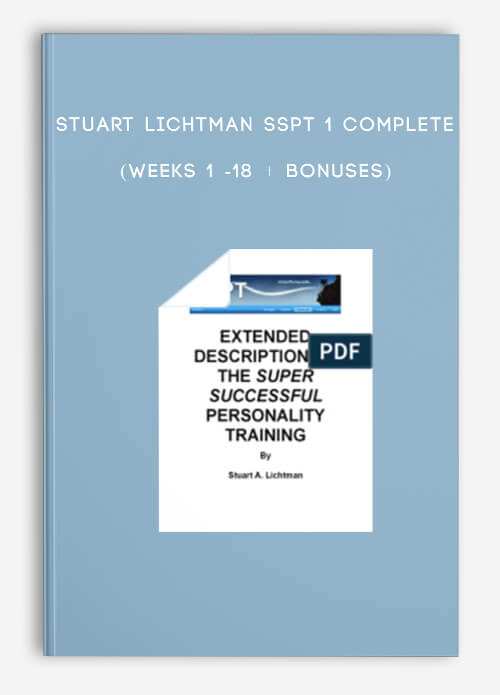 Stuart Lichtman 2014* DO YOU WANT TO DEVELOP THE PERSONALITY OF LEONARDO DICAPRIO, RICHARD BRANSON and MICHAEL JORDAN?* DO YOU WANT TO GET INTO A ROOM AND HAVE ALL THE GIRLS FIGHTING FOR YOU?* DO YOU WANT TO BUILD SUCCESSFUL COMPANIES LIKE A BOSS?…Then this is THE CoachingBrutally PRACTICAL from Day 1THERE ARE TWO IMPORTANT ASPECTS OF BECOMING EXTREMELY AND CONSISTENTLY SUCCESSFUL, TECHNIQUES AND PERSONALITY. SO FAR, I’VE INTRODUCED YOU TO ONLY THE CT TECHNIQUES… TODAY, I’LL TALK ABOUT THE OTHER ASPECT

So far, in your Cybernetic Transposition studies, you have been learning the first aspect, the CT Techniques. These empower you with the tremendously powerful ability to achieve seemingly impossible very specific results.But these CT Techniques comprise only one major aspect of CT. The second major aspect involves applying those techniques to enhancing your overal personality into one that works constantly, 24/7/365, to make you extremely successful.*** You already have a glimmer of what I’m talking about. *** Whenever you have resolved a Blocker, you have permanently changed one very specific aspect of your personality and I think you know how powerfully that has improved your life.

*** What I’m now talking about is multiplying that improvement tremendously.

*** What I am talking about today is, in an organized and proven way, making very important, permanent changes in your personality whose positive impact on your life will astounding you. ======================You see, as amazingly powerful as it is, setting and achieving a seemingly impossible CT objective produces a one-time result.

*** However enhancing your personality in the way I will talk about today produces continual – 24/7/365 – extremely gratifying results.

*** In your imagination, compare the two.

*** See what I mean? =====================COULDN’T YOUR PERSONALITY REALLY DO A LOT BETTER FOR YOU?Does your personality actually contribute enough to your successfulness, joy, well-being and happiness to satisfy you?

Do people and girls want to be around you?

Do you want to be around you?

Are you truly happy and satisfied with your life?

Do you consider it really successful?

Or do you just say, “That’s just the way I am” and go with the status quo of “not where I want to be?”

*** Given that you’re reading this, I seriously doubt that what I just proposed is true of you. ====================By participating in The CT Super Successful Personality Training, you will incredibly enhance your personality by developing or remarkably enhancing the following characteristics.

1. Being Outgoing. Being Outgoing means others consider you friendly and socially confident. An outgoing person is gregarious, friendly, affable, easygoing and fun to be with.

2. Having Connect-Ability. That is, the ability to rapidly and easily connect with people in a way that causes them to instantly intuitively trust you, to create what I call a “trust pipeline.” Connect-Ability underlies effective leadership, management and selling.

3. Being A Good Listener. The ability to pick up not only the words but the meaning of what another person is consciously and unconsciously expressing and experiencing. It is the basis of empathy which, along with being Outgoing, having Connect-Ability and being Appropriately Compassionate and Kind underlies the major skill of Effective Relationship-Building.

6. Persistence. Persistence is the skill of picking yourself up by your bootstraps and carrying on when faced with the obstacles that are part of accomplishing anything. It is also called resilience or tenacity. It doesn’t matter what area of life you’re talking about, Persistence is key to getting the result you want.

7. Vigilance and Flexibility. If you’re a fan of American or European football, you’ve seen what I mean in action. For example, just watch a top American football half back running at great speed into holes that suddenly appear, incredibly rapidly changing direction while absolutely maintaining their focus on the goal. Similarly, highly successful people need to very rapidly and effectively become aware of and respond to relevant changes in their environment while remaining focused on their goals.

8. Has An Effective BS Detector. In order to be successful at almost anything, you must gather expertise and information from other people and sources. However, a lot of those others and sources are, in effect, “woofers” who are good talkers but don’t really know what they are talking about. So the ability to sort out the wheat from the chaff, sort out good advice and valid statements from bad, is absolutely critically important. The lack of an Effective BS Detector is at the heart of nearly all interpersonal failures. whether it involves believing someone’s assertion or counting on someone who doesn’t do what they say they will.

9. Proven Luck. Proven Luck is what Napoleon required of his Marshalls and is closely related to precognition, that is, having accurate hunches about which way to go when you don’t have enough information. Picking the right people, doing the right thing, effectively pointing the way when you don’t have enough information are all a part of Proven Luck. And Luck is a critical aspect of a Super Successful Personality. Just ask anyone who is successful at essentially anything.

10. Actually Does What Is Required. That is, Actually Doing what needs to be done because only action produces results. Thinking, musing, discussing, planning, plotting and procrastination generate nothing outside of your own mind. Only Actually Doing does that. But it’s not only taking action, but rather taking the action that is required which often involves achieving seemingly impossible results. Just ask anyone who has been successful at essentially anything and they’ll tell you that in getting there, they were faced with doing what others said was impossible.

11. An Optimistic Pessimist or a Pessimistic Optimist. Whatever you call it, a successful person must be optimistic enough to be strongly pulled forward by their vision while, at the same time, pessimistic enough to see the pitfalls that must be remedied. They must also have a core of neutrality – neither positive nor negative – that allows them to effectively evaluate and build on the positives and remedy the negatives. In other words, they must be imperturbable.

12. Simplification. Simplification in this context means rapidly and accurately perceiving the core of an issue, an opportunity or a pitfall. It is the ability to rapidly and effectively home in on the essence of something and that is the precursor to inventing an appropriate response through Effective Creativity. It is the essence of genius as many recognized geniuses have pointed out through the ages.

*** These are the 14 tremendously powerful personality characteristics you…