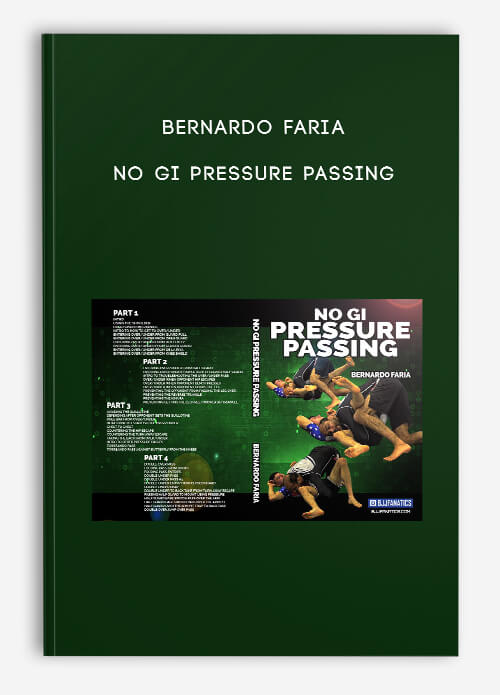 Get NO GI PRESSURE PASSING by BERNARDO FARIA at Salaedu.com

When Bernardo gets on top, he is basically unstoppable. He clears grips, butterfly hooks, you name it… and puts pressure on the guard player until he breaks. It doesn’t matter who is on bottom, they all break.
Here is a list of Black Belt World Champions whose guards he has passed or submitted in their guard in competition:
Leandro Lo – Gabriel Arges – Braulio Estima – Rafael Lovato – Erberth Santos – Rodrigo Cavaca
Have you ever been frustrated and unable to pass someone’s guard?
You Don’t Need To Be Young, Strong Or Fast To Use Bernardo’s Method

Bernardo puts both knees on the mat when he passes. This is because when you are on the knees you shut down most of the guards including: De La Riva Guard, Berimbolo, Single Lex X Guard, X Guard, Reverse De La Riva…  Not only do you shut down the most popular open guards, you will also nullify most leg attacks.

Today leg locks are becoming more and more prevalent.  If you are grappling no gi and you do not have a passing approach that will nullify leg locks, you are putting yourself in danger.  These days standing and passing in no gi is extremely dangerous.
When you stand and pass in no gi, you are exposing yourself to a lot of potential leg attacks, that is why pressure passing is becoming more and more popular.
Bernardo’s battle tested method is the best passing system in the world to destroy leg lockers.  Once you are able to solidify Bernardo’s trademark Over Under position it is virtually impossible for your opponent to engage in leg attacks or even begin tpo elevate you.

So much of being able to pass the guard is the ability to put someone in a position that they do not want to be in.  You need to dictate the positions in the match and make them play your game.  When you learn Bernardo’s no gi pressure passing system, you will be able to take everyone out of their game.

No one will be able to heel hook, ankle lock, knee bar, toe hold, or establish any guard on you.  They will be defending the whole time.  The beauty of this passing system is that even if you are not able to pass to the guard you will be able to nullify their game completely.

1 review for NO GI PRESSURE PASSING by BERNARDO FARIA SECRETS OF JAPANESE SWORDSMANSHIP: THE HIDDEN MOVEMENTS by ROGER WEHRHAHN