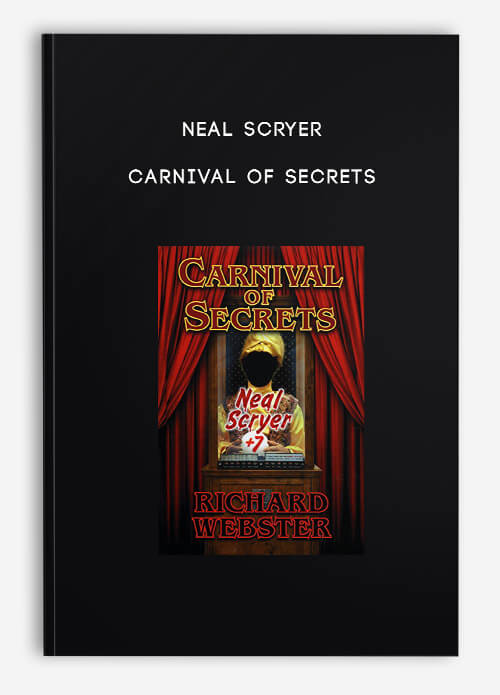 Get Neal Scryer – Carnival Of Secrets at Salaedu.com

From Richard Osterlind:
“Carnival of Secrets is becoming one of my favorite books on mentalism! This book has everything! There are wonderful Neal Scryer effects that are classic mentalism, based on classic ideas and with classic presentations that are straight forward and powerful. If all this book did was show how the simplest of principles can be turned into miracles, that would be enough. But that’s only the beginning. Even if you don’t do readings, learning the techniques this tome teaches can add infinite riches to your work. These methods are the best of the best and will take you to a new dimension that is what true mentalism is all about. And then the essays! Michael Weber, Max Maven, Richard Webster, Mark Garetz, Loyd Auerbach and W.Barclay! Your head will be spinning by the time you reach the end and you will turn around and start reading it again – just like I did! This is our art in its highest form. If you are serious about mentalism, you will get this.”
– Richard Osterlind – March, 2013

A small peek from the “forward” by Marc Salem:
His friends and collaborators are legion and proof enough of the high regard with which he is held – and that proof continues to be published.

A small peek from the “afterword” from Bob Cassidy:
This book along with Neal’s previous works, contains some of the most elegantly simple, direct and powerful mentalism that has appeared in print since the golden days of Bascom Jones Magick.

Included in this book:
Foreword by Marc Salem and Afterward by Bob Cassidy. This book is dedicated to one of the great unsung hero’s of our art Jerome Finley!

Scryer’s Haunted Pen – which he was reluctant to tip and only sent to a few friends – again with an additional routine from Michael Weber.

Michael Weber’s Six Golden Rules on how to be a better performer.
Max Maven’s Playing by Ear – Essay – which is also focused on the art of performance.
And Effects, Readings and essays by the other following contibutors:
1. Michael Weber – (contributions featured above).
2. Max Maven – Essay Playing By Ear.
3. Peter Arcane – Internationally respected UK Mentalist.
4. Mark Garetz – Psychic Entertainer, Palm Reader and President of the Psychic Entertainer’s Association.
5. Loyd Auerbach – One of the top parapsychologists in the world!
6. Richard Webster’s Reputation Maker – Astral Travel, one of the most beautiful experiences someone can take!
7. W. Barclay – Shares his coveted John Lennon Seance which features twenty pages of script and explanation! This is an exceptionally strong and emotional piece, which easily could sell for $100.

And last but certainly not least – 25 Scryer original never before published pieces! Just the names of the contributors – as well as the contributions will entice you! Add the new coveted material from Scryer – you have the perfect balance of quality and variety for sure!