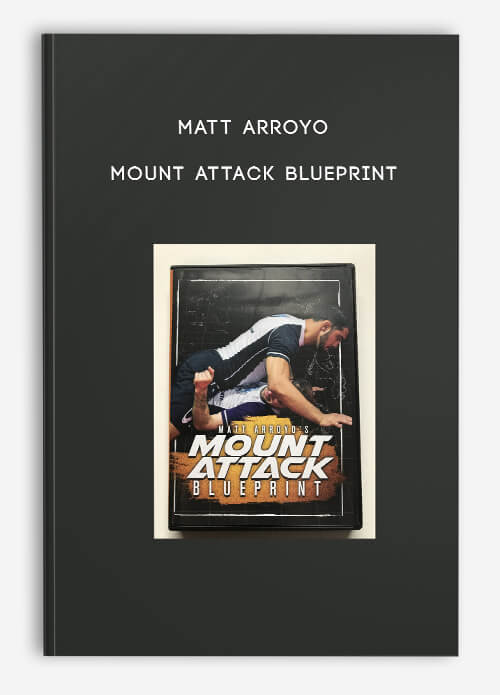 Get MOUNT ATTACK BLUEPRINT by MATT ARROYO at Salaedu.com

“Discover A Step By Step Blueprint Of Exactly How To Control, Submit, And Escape From The One Of The Most Dominating Yet Frustrating Position In BJJ….The Mount Position…That Works Even If You Are Not Big, Strong, Or Athletic.” Hi name is Matt Arroyo. I am a TUF 6 Veteran and ADCC 2015 Veteran. I have been training since 2003 and got my black belt from Rob Kahn (Royce Gracie’s first ever black belt) in 2009. I have trained with almost every grappling champion you can think of from Marcelo Garcia, Andre Galvao, Robert Drysdale, Matt Serra, Cyborg, Rodolfo Vieira, Keenan Cornelius, Royce Gracie, and so many others! If there is one thing I learned by training with all these animals ….When they get a dominant position..they control it…and capitalize from it!

One Of The Most Common Question People Ask Is How To Control And Escape The Mount Position… This has to be one of the biggest frustration in Brazilian Jiu Jitsu! You smack, bump, and get ready to roll…Then you use crazy amounts of energy to pass your partners guard!! Then mount them… What happens next? Two seconds later he is back to guard, or he just simply throws you off and you are now EXHAUSTED!! Or… Even Worse, you get mounted by a bigger and stronger opponent and he feels so heavy that you can barely breathe!! and you feel helpless like there is no way out! There is no greater frustration then feeling controlled and dominated in BJJ!

I Knew I Had To Develop A System For Mount Control, Attacks And Escapes… A blueprint…for someone to follow so that once they got to mount they stayed there! An attack system for each of the most popular mount control positions that anyone of any size can use TODAY to submit their opponents! A blueprint of exactly how to escape the mount depending on which type of mount position your opponent has on you…Not just the “how” but also (more importantly) the “when.” From going through hundreds of BJJ Instructionals since 2003, training with champions, competing, and attending seminars I took all of the knowledge that I learned and used on mount control attacks and escapes and morphed it all into an easy to use “SYSTEM.” I am Very Proud to Introduce You to My Mount Attack Blueprint DVD!

SECRETS OF JAPANESE SWORDSMANSHIP: THE HIDDEN MOVEMENTS by ROGER WEHRHAHN