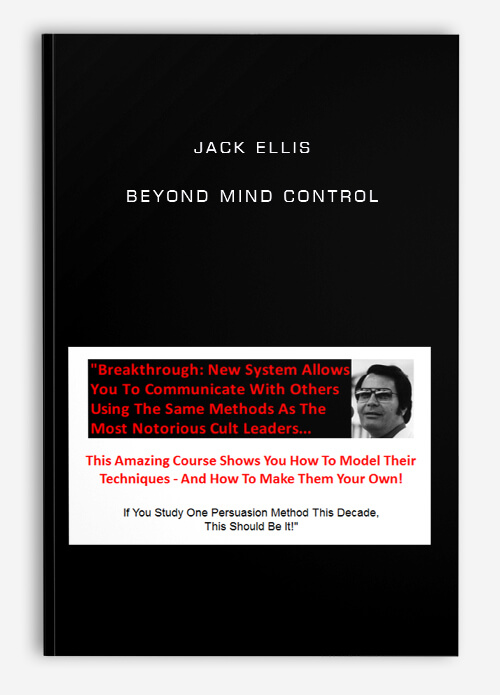 Get Jack Ellis – Beyond Mind Control at Salaedu.com

This product includes videos of Charles Manson, Charles Applewhite (Heaven’s Gate)  and Jim Jones, of the People’s Temple along with a workbook that inclues transcripts of each segment.  The goal of the program is analyze how these notorious figures communicated and give users access to their methods.

“Beyond Mind Control” is a comprehensive study of cult leaders and their persuasion tactics.   Four of the most infamous cult leaders were chosen to have their words dissected and broken down into micro-chunks.   While reading the work book and participating in the exercises, you’ll learn mind manipulation methods you never knew existed.

“Charles Manson, the Mephistophelean guru who raped and bastardised the minds of all those who gave themselves so totally to him…” – Vincent Bugliosi, prosecutor at Manson trial

“He’s a charming guy, he really had a charisma.” – Gary Stromberg, author and acquaintance of Charles Manson

Charles Manson led what became known as the Manson Family, a hippie commune that arose in California in the late 1960s.   He was convicted of conspiracy to commit the Tate/LaBianca murders, carried out by members of the group at his instruction.   He was found guilty of the murders themselves through the joint-responsibility rule.

What you probably don’t know about Manson is the fact that he’s an absolute master of persuasion!   Very seldom will media outlets play his interviews uncut, they always edit them and insert their own “commentary.”

In this rare interview Manson is at his cantankerous best, dishing out pattern interrupts and confusing the interviewer at every possible opportunity.

Here are some of the killer persuasion
methods you’ll learn in this section:

Send your opponent’s mind spinning like a Ferris wheel using a method that guarantees confusion! The crazy thing is, it’s easy as hell to do!

A quick, easy way to “turn the tables” when communicating that makes your interrogator want to cater to you

Get a waterfall of charisma, week after week, month after month.

TWO devastating pattern interrupt techniques that have never been published before

The secret time distortion tactic used by hypnosis masters (HINT: You can use this by uttering just three words!)

How to create powerful “personality tension” that arouses people’s minds and makes them hang on your every word.

“…he had tremendous ability to express emotions.” – author Micha Popper, “Hypnotic leadership: leaders, followers, and the loss of self”

“Jonestown may have been a mind-control experiment…” Joseph Holsinger, congressional aide to Leo Ryan (who was murdered at Jonestown)

Jim Jones was the founder and leader of the Peoples Temple, which is best known for the November 18, 1978 mass suicide of more than 900 Temple members in Jonestown, Guyana along with the deaths of nine other people at a nearby airstrip and in Georgetown.   Jones had the persuasion power to build a following of over 1000 people, and even had held court (and had his photograph taken) with First Lady, Rosalynn Carter.

What You Can Learn From The Reverend:

Blast your opposition to pieces and save time.   I’ll show you how you can agree with them and still get them to do what you want!

A proven way to “keep the power” in any relationship and guarantee that YOU are in charge… and the ball is always in your court (This will also eliminate their desire to play “head games” with you… because they KNOW they’ll lose!)

The astonishing secret of master communicators that practically FORCES everybody to say “yes” to anything you say (This is so easy to learn you’ll use it THE NIGHT YOU LEARN IT!)

Exactly how to deal with “drama” from people… in a way that will make them admire you, respect you, and increase their devotion to you

Hear Jones expose the secrets to generating slave-like devotion to your ideas.   This is mind blowing in simplicity.

“Common rituals and a common sense of purpose were the supposed passports to paradise…” – Frank Bruni, New York Times writer

The second time I sat with King Do (Marshall Applewhite), I felt absolutely there was no lie in him, that there was truth and goodness beyond anything I’ve ever seen.” – former female member of the “Heaven’s Gate” cult

“Applewhite himself compared the obedience of a ‘good’ religious disciple to that of a ‘good’ dog.” – Herman de Tollenaere, religious writer

Marshall Applewhite, later known as Do, was the leader of the Heaven’s Gate group.   He convinced 39 other people to commit suicide with him and “evolve to a higher level.”

This is what you will discover in the Marshall Applewhite section:

The Persuasion Strategy that never wears out, never loses its power

How to project a powerful, magnetic confidence to people by framing them as “guests in your reality” as opposed to people whose approval you need

Answers to the profound question: “How do you make a person want something?”

Discover how to make people believe the most ridiculous ideas (and why it will help you make breakthroughs you’ve never thought possible!)

Get the exact phrases that will conquer people’s will. These can be altered for any purpose you want

Section 4 is David Koresh, but since this is an older version, David Koresh is not included

So what is NLP?
NLP stands for Neuro-Linguistic Programming. Neuro refers to your neurology;
Linguistic refers to language; programming refers to how that neural language functions.
In other words, learning NLP is like learning the language of your own mind!

NLP is the study of excellent communication–both with yourself, and with others.
It was developed by modeling excellent communicators and therapists who got results with their clients.
NLP is a set of tools and techniques, but it is so much more than that.
It is an attitude and a methodology of knowing how to achieve your goals and get results Thinking For A Change from Michael Breen