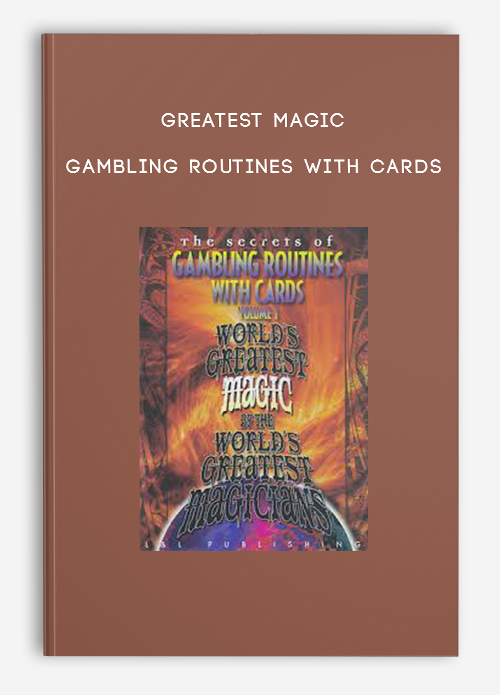 Get Greatest Magic – Gambling Routines with Cards at Salaedu.com

One of the things magicians who perform with playing cards hear from audiences all the time is, “I wouldn’t want to play cards with you!” This is heard even more frequently when the theme of the particular card effect is gambling. Being able to win, seemingly at will, at card games is a very compelling – and commercial – skill to demonstrate to non-magicians as it conjures up very exciting possibilities!

On this DVD, you’ll meet six magicians who no one would want to play cards with!

Harry Lorayne leads off with a shaggy dog story about a gambler acquaintance who could shuffle cards face up into face down (twice!) and somehow they end up all the same way – that is, except for the two selected cards. Marc DeSouza is next and despite giving the spectator every choice, he still ends up with the winning poker hand. Bill Malone and Michael Ammar each have their own clever take on the classic story of a showdown between a gambler and a magician while Martin Nash demonstrates an uncanny ability to deal himself Aces no matter where they lie in the deck. Finally, Darwin Ortiz rounds out this volume with two spectacular effects. First, he demonstrates how a gambler can control every card in the deck by keeping all of the red cards separate from the black ones – this despite repeated shuffling even by the spectators. Then, in his amazing version of the classic 10-Card Poker Deal, he shows how a card sharp can always win even when the other player makes every one of the dealing decisions.

Strong magic combined with the romance of gambling is an irresistible combination and you’ll find no better example of this highly commercial hybrid than the performers – and performances – collected on this volume.

Leading off this volume is Bill Malone who skillfully demonstrates what the curriculum would be if there were such a thing as a school for card cheats.

Harry Lorayne follows with his quintessential version of Magician vs. Gambler while Darwin Ortiz shows how to deal perfect poker hands and – as a grand finale, a perfect Bridge hand – from a repeatedly shuffled deck. Marc DeSouza weaves a tale of what happens when a gambler gets into a card game with an infernal opponent while Bill Malone returns with a demonstration of his uncanny ability to deal the four Aces from the bottom – and the middle! – of the deck. Finally, James Swain finishes with two effects from gambling expert Steve Forte that will stun even knowledgeable card workers.

Strong magic combined with the romance of gambling is an irresistible combination and you’ll find no better example of this highly commercial hybrid than the performers – and performances – collected on this volume.

Kicking off this volume is Bruce Cervon with a powerful poker routine that, despite an incredibly fair procedure of the spectators trading cards with the performer, he still ends up with the four Aces.
Chicago magic legend Steve Draun follows by dealing himself a full house from a shuffled deck of cards after announcing precisely what cards his winning hand would consist of. Harry Lorayne is next with a story about what can happen when you get into a poker game in strange places while Bill Malone teaches his audience how to stack a winning hand – but still amazes them in the process. Martin Nash goes for the world deck stacking record while James Swain shows you how to magically turn a mediocre poker hand into a guaranteed winner. Finally, Paul Wilson demonstrates a classic right out of the pages of The Royal Road to Card Magic – a dead easy way to make your audiences believe they can cut to the four Aces. Strong magic combined with the romance of gambling is an irresistible combination and you’ll find no better example of this highly commercial hybrid than the performers – and performances – collected on this volume.