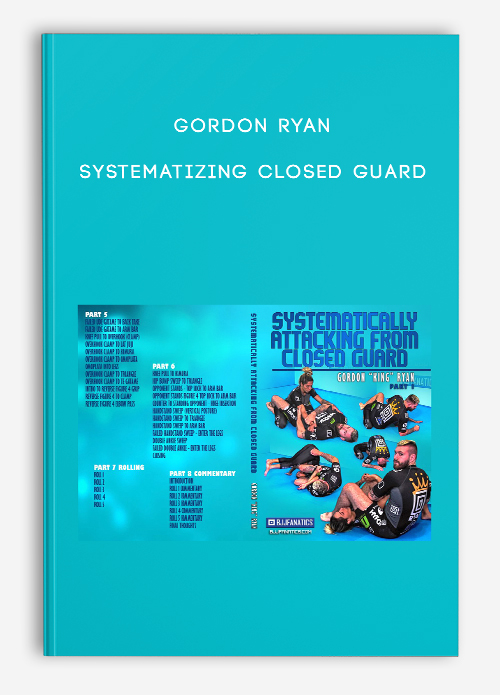 Gordon Shows One Of His Favorite Techniques From The Closed Guard, The Arm Drag To Back Take:

In Early 2019 Gordon Ryan suffered a catastrophic knee injury vs Joao Gabriel in the main Event at Kasai in Dallas.  After Surgery when he started to train again he lacked the explosion he’s used whenever he was in a tough spot.  Athletically he no longer had any advantages… but he needed a guard to control people with.  So he turned to an old favorite the closed guard.
From there he could use old school controls and “submit more people than he ever has – but this time using closed guard” according his coach John Danaher.
This isn’t a system that requires muscle, flexibility or explosiveness – it only requires knowledge and the ability to follow Gordon’s System.  And since he was trained by John Danaher – he’s one of the best instructors on Earth. What Will You Learn?

After the success of his blockbuster Systematically Attacking The Guard, Gordon Ryan is sharing his knowledge with the world again as he explains the closed guard system anyone can use to dominate from their back. Get ready to learn from the best again as the world’s best no gi grappler is back with BJJ Fanatics to show the system that he and his team have developed around one of jiu-jitsu’s most important and powerful positions, giving you an answer for every situation.

With step-by-step instruction, and every detail revealed, learn how to hit the most powerful sweeps and submissions with maximum efficiency and effectiveness. After six full volumes of instruction, watch The King himself take on a room full of BJJ fighters from his closed guard, then go in and narrate and explain exactly what he was doing so you can get inside the mind of a champion. Gordon Ryan is one of the best grapplers on Earth, and it’s because of his team’s approach to the game: with Coach John Danaher, Gordon and his teammates have developed fully comprehensive systems around the most important positions and attacks.

They use what is most effective, and have counters ready for any situation. In clear, precise instructions, you are getting an encyclopedia on the closed guard, a resource you can come back to over and over while you study and improve. You can usually find Gordon Ryan attacking legs, or the back, or passing guard in his fights, so why is he explaining closed guard? Because Gordon’s one true specialty isn’t a single position, it’s the systematic thinking that always has him a step ahead of the competition.

The closed guard is a strong, single position where Gordon shows the movements, grips, combinations, and counters that can turn anyone into a master off their back. Aggressively attack submissions and sweeps with this careful guidance from an ADCC and IBJJF Champion. Check out these testimonials from people who have seen Gordon teach!

Attacking the guard covers everything you could need to know about the style and concept Gordon uses to pass guard. Each position is explained, demonstrated and the theory behind it often given so the user can immediately begin to implement and adapt these concepts in their own game. I was able to immediately start using the methods explained within the video and was able to retain the information which can often be an issue with instructionals and seminars. Highly recommended this to all BJJ players

Gordon’s teaching greatly effected not just my own passing styles but also the way I go about teaching classes all together. The details he reached to increase probability of passing with limbs exposed has also effected the reverse situation when I am playing guard positions to be more accountable for my own positions on bottom. The micro positioning and the fluidity of the system together has greatly increased my overall Jiu jitsu.

I love the passing system. By showing the different ways to pass different type of guards, it has given me the ability to see what works for me. It has also helped my own guard game by recognizing various attacks.

The series covers so many skill levels, that I have been able to show my 13 and 8yo sons some tips on passing full guard, which is covered in the beginning of the instructional. Looking forward to more.

Absolutely loved how Gordon structured this DVD and chained sequences together. His attention to detail is not helpful, it is game changing. His ability to make you understand concepts doesn’t just apply to passing, but to your entire game. For example, the way he conveys inside positions. As a lower belt, understanding these concepts are huge, and Gordon does a beautiful job delivering them. I’m looking forward to his closed guard instructionals.

I have always struggled with guard passing. It has been the weakest link in my game for years and has developed the slowest out of all the other aspects. It impacted every aspect of my grappling game, from the takedowns I would use to what submissions I would go for. Why? If I land an inside trip or a double leg, I would be more likely to end up in the person’s guard, and have to struggle my way out of it. Now, with Gordon Ryan’s approach, I don’t care as much. He goes over a system of passing rather than just showing moves. Key concepts that have really helped me and my training partners when it comes to passing the guard. I showed one of our white belts the Lockdown Pass Gordon shows, and he used it ten minutes later in competition. These approaches work. And there is a dual benefit that I don’t see advertised. His guard passing instructional has in turn helped improve my guard retention as well. When learning these systems and approaches, you can just as easily reverse engineer it so that you can make your guard harder to pass.

Gordon speaks in a concise way and is very thorough with key details. With the easy accessibility of the BJJfanatics website, I have it on my phone at all times. So, if I struggle to pass a certain kind of guard that night, I can look it up when I go into work and remind myself of what I was missing. He goes through how to contend with every popular guard, and luckily a lot of the passing approaches become instinctual. It is both a proactive and a reactive approach. Ryan teaches you how to initiate your passes as well as how to adjust along the way based on what your opponent does. Grappling is a very dynamic sport, so a “one size fits all approach” doesn’t really work. I have had many moves in the past fail because an opponent does something slightly weird and precludes me from being able to finish a sequence, whether they are good and intentionally did it or if they aren’t good and just did it by accident. Gordon Ryan’s Systematically Attacking the Guard however offers contingencies. It is very predictive of what the opponent will do next, and how to react to it in order to best attack their guard.

It also goes beyond just passing; it really is ATTACKING the guard. Sometimes when the opponent is being overly defensive to not be passed, they are giving up submission opportunities that Gordon goes over thoroughly, and I have used successfully even against black belts. I highly recommend this instructional and going to see him if he is ever near you for a seminar. I have been to three so far, and would like to go again. I think some people get lost in his bravado and personality (which I think are entertaining and interesting,) and lose sight of his intelligence and his mind for the sport. A good part of my game now is based on things I have learned from his instructional and seminars, and end up using something he has shown every time I train.

So What Exactly Is On This Series?

Side Scissor to Back Take

Side Scissor to Juji Gatame

Side Scissor to Rear Triangle

Side Scissor to Pendulum Sweep

Opponent Pulled out of Triangle – Enter The Legs

Attempted Leg Entry Back to Triangle

Arm Drag to Back Take

Misdirection to Opposite Side Pendulum

Successful Stack Into the Legs

Pinch Headlock to The Back

Pinch Headlock to the Clamp

Failed Ude Gatame to Back Take

So What Does It All Cost?

Well, that depends, what is it worth to be able to learn Gordon “The King” Ryan’s closed guard system?

How much do you think one private lesson with Gordon Ryan cost? We could have easily charged you $500 for this type of experience, instead, cut that price by almost 50%..

That’s right get “Systemizing The Closed Guard by Gordon Ryan” for just: Gordon Ryan – My Evolution Your Revolution