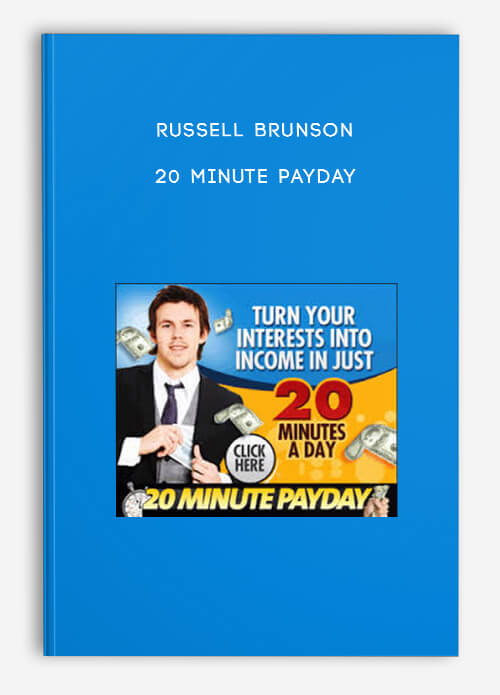 Get 20 minute payday by Russell Brunson at Salaedu.com

I have an unusual money making story to share with you today.
It’s about how 2 of my friends (Xan and Jenn Spenser) currently make Over $422.82 a day, $2,959.75 a WEEK
and $13,107.46 a MONTH while “working” for just 20 minutes a day!
Now, before you jump to conclusions, let me tell you that Xan and Jenn make this kind of money with one
simple website that has nothing to do with “making money”, they have no copy writing skills, no formal
“internet marketing” education, no start-up capital, and because of their jobs had VERY little time… (about 20
minutes per day).
See, I met Xan and Jenn about 18 months ago. They were newly weds, and it was about Christmas time. While
they should have been enjoying their rst Christmas together, they were stressed out because while they had
thought they were being smart investing in real estate, they were now stuck with 4 mortgages and no renters.
They were approaching the holidays with only $38 in their bank accounts – not even enough to buy each other
Christmas gifts.
So there they were, and probably like you, they went online looking for solutions.
Now, I had no idea that was their situation when I met them.
In fact, I met them because at the time I was running a contest called “the $100,000,000 challenge” where we
were teaching our students a very unique way to make money online, and the winner of the contest was going

to win a brand new corvette!
Now, what makes me laugh is later Jenn told me that when Xan told her that he was going to start an online
business and that he was competing to win a corvette, she laughed because he had tried other things in the
past and failed.
She also said she was condent that they would never make any money doing this – BUT… she wanted to
support her husband, so she decided to try with him.
So in January they started watching the training for the contest, and then simply applying everything they
learned. By the end of February they had completed all of the training and by March they launched their
website!
You see, if you setup your business right from the beginning, following the 20 minute payday system, then you
don’t NEED to spend hundreds of hours on your business. You can literally do it in just 20 minutes a day as Xan
and Jenn just proved.
So, now that you’ve seen what they did during their FIRST year online, with just one simple website – would you
like to see what they’ve done so far this year…?
Well, instead of shifting their focus, and putting all of their free time back into the business, they decided they
like their “20 minute a day” lifestyle and didn’t want to waste their new found free time working.
So Xan decided to follow one of his dreams of becoming an actor, and start acting again. He has already been in
a bunch of commercials and just landed the lead role in a new movie! Winning Clients Over by Thefutur